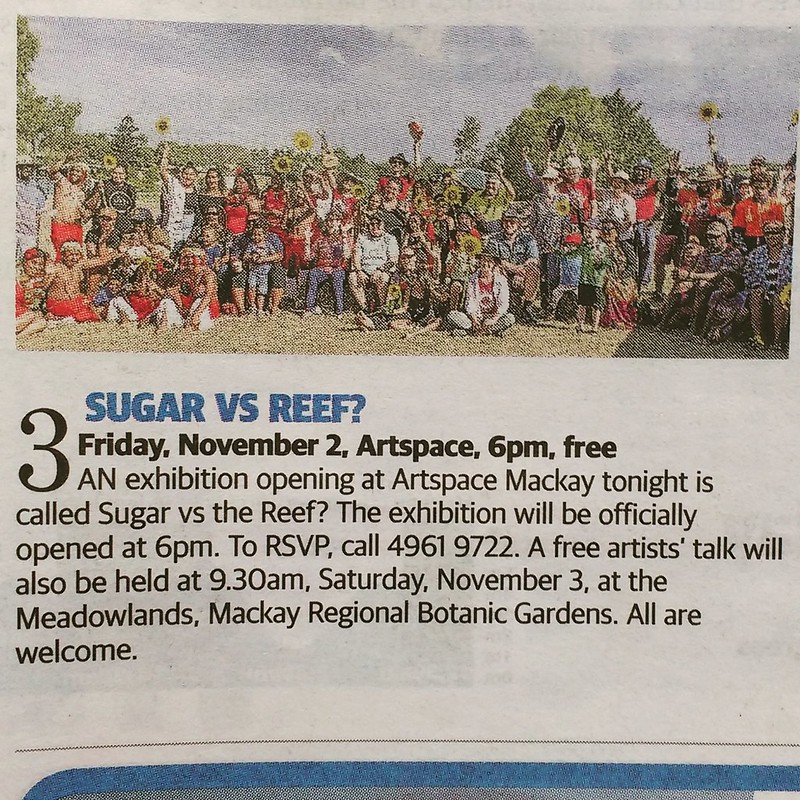 The following is a media release from Artspace Mackay, posted on the Mackay Regional Council website:

An exhibition opening at Artspace Mackay tomorrow is called Sugar vs the Reef?

However, the theme is not one of conflict, but rather in-depth collaboration.

Wollongong artists Kim Williams and Lucas Ihlein have been visiting the Mackay region since 2014.

Over that time, they have sought to gain a deeper understanding of the sugarcane industry and investigate how artists and farmers can work together on large-scale ecology problems.

Cr Fran Mann said Sugar vs the Reef? was a culmination of that investigation and a showcase for a larger body of work that included a series of large-scale art installations and events.

“The two projects that residents would be most familiar with are the ‘Sunset Symphony in the Sunflowers’ event on the Mattsson farm in 2017 and the current and ongoing project ‘Watershed Land Art’ at the Mackay Regional Botanic Gardens,” Cr Mann said.

“Lucas and Kim describe their arts practice as ‘socially-engaged’ art, meaning they see the process of engaging and collaborating with communities as the most important aspect of their work,” she said.

“The Watershed Land Art Project is a great example of this – to create ‘The Beacon’, a 26-metre diameter demonstration farm at the Botanic Gardens, they have worked with a huge cross section of the community.

“They worked with local farmers to explore and promote regenerative agriculture practices while also creating stunning land art, and this then has a flow-on benefit to water quality and the Great Barrier Reef.

“More than that though, through the different phases of the project they have also celebrated the contribution of the Australian South Sea Islander (ASSI) communities in the sugarcane industry in Queensland.

“They’ve also brought together farmers, traditional owners, scientists and the general public and perfectly combined culture and agriculture with their projects.”

To learn more about the collaborations forged by Kim and Lucas, residents are invited to meet the artists at the exhibition opening tomorrow (Friday, November 2).

A free Auslan-interpreted artists’ floor talk with Lucas Ihlein and Kim Williams will be held at 5pm in Gallery Three of Artspace Mackay.

The exhibition will be officially opened at 6pm by Jeremy Smith, Director Community, Emerging and Experimental Arts from the Australia Council for the Arts.

A free artists’ talk will also be held at 9.30am, Saturday, November 3, at the Meadowlands, Mackay Regional Botanic Gardens. All are welcome.