Graham Stirling on Soil and Sugar

On Tuesday morning I joined more than 50 farmers at the Walkerston Leagues Club to hear a “breakfast talk” on the importance of soil health in sugar cane growing.

The event started at six thirty in the morning.

Six thirty! That’s way too early. An artist like me should still be dreaming at six thirty. But according to the farmers I spoke to, it’s the best time to schedule this sort of thing. They’re up at dawn, they’ve got to eat breakfast anyway, and a free hot brekkie was provided at the Leagues Club.

Starting this early, the farmers are fresh – not exhausted from physical work – they don’t have to break off from the middle of a job and leave the tractor in the paddock. And there’s no point scheduling it at day’s end – who wants to go all dusty and tired to hear someone talk about complex sub-soil science?

The scientist in question was Dr Graham Stirling, who has recently co-authored a book called Soil Health, Soil Biology, Soilborne Diseases and Sustainable Agriculture: A Guide. Chapter 9 of this new book is called “Yield decline of sugarcane: a soil health problem overcome by modifying the farming system”.

The farmer who was sitting next to me at breakfast looked around and said he thought more farmers should have come along. There are about 400 cane growers in the Mackay area, so about 1 in 8 were in attendance – which I reckon is a pretty good turnout. But according to my neighbour, the ones who really needed to be there were absent. They might be struggling with their crops, and this is just the sort of thing that might catalyse a change in fortunes.

I’ve heard farmers say this sort of thing several times since I arrived in Mackay: that there are two types of people in canegrowing – those who have their ears pricked up for fresh ideas and are looking to continuously learn; and those that have their heads down, and don’t want to listen to anything that might prompt a change in the status quo.

(Personally, I haven’t met any of the farmers from the second category yet – so I can’t verify this social analysis of the farmer typology. It may be a case of confirmation bias in my own research. I mean, if an outsider like me is nosing around, trying to meet people who want to talk about farming, then the farmers who are most likely to step forward are those who fit into the first category. Right?)

Anyway. I enjoyed Graham’s talk. It was very complex, and quite long, and I had to work hard to stay attentive to all the nuances about nemotodes and bacteria and fungi in the subsoil environment.

Graham was involved in the famous (infamous?) Sugar Yield Decline Joint Venture (SYDJV) more than ten years ago, so he knows his stuff when it comes to the difficulties canefarmers have in getting a decent yield.

Here are some things I picked up from his talk: 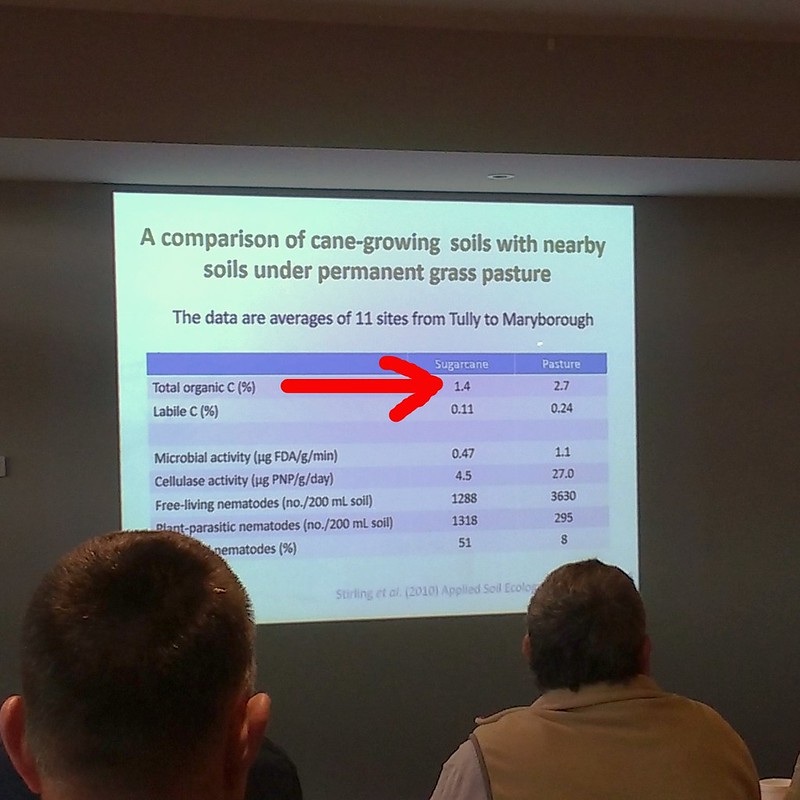 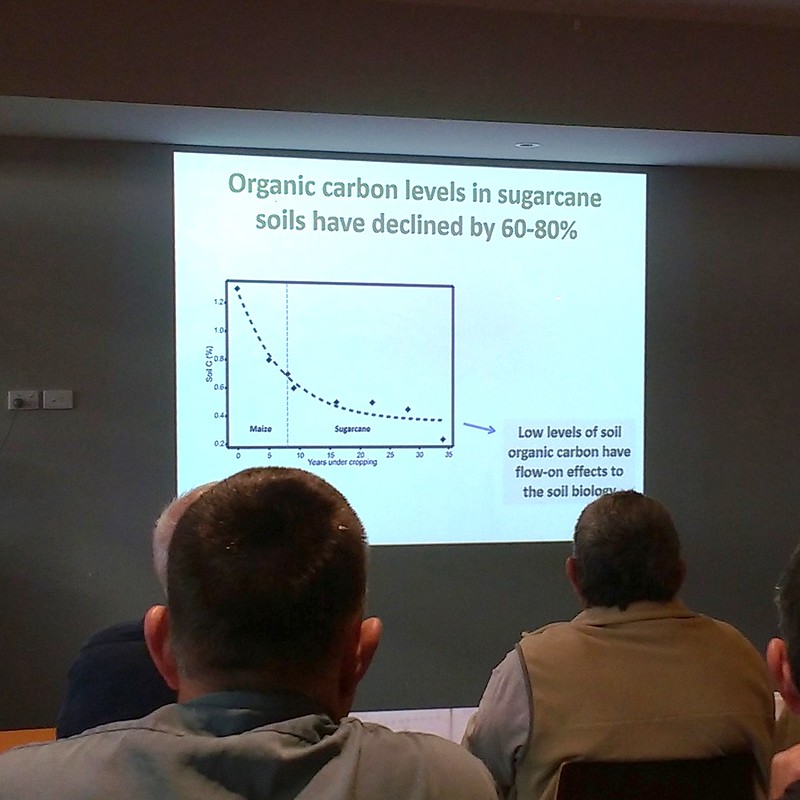 All of this means that compared to pasture, it’s harder for the soil ecosystem in a sugarcane farm to support a healthy plant.

What’s more, it seems that when you try to kill the plant-parasitic nemotodes (using some sort of chemical, I’m not sure what exactly) you end up killing many of the beneficial ones too. This, Graham said, leaves a “biological vacuum” which will quickly fill up again with the parasitic nemotodes you were trying to get rid of in the first place.

Here’s what I understood from all of this:

It seems like you’re always going to have a mix of the nemotodes you want and the ones you don’t want. So you might as well increase the soil carbon levels to tip the balance in the favour of the good ones.

How do you increase the carbon content? Graham’s recommendations are summarised in this slide: 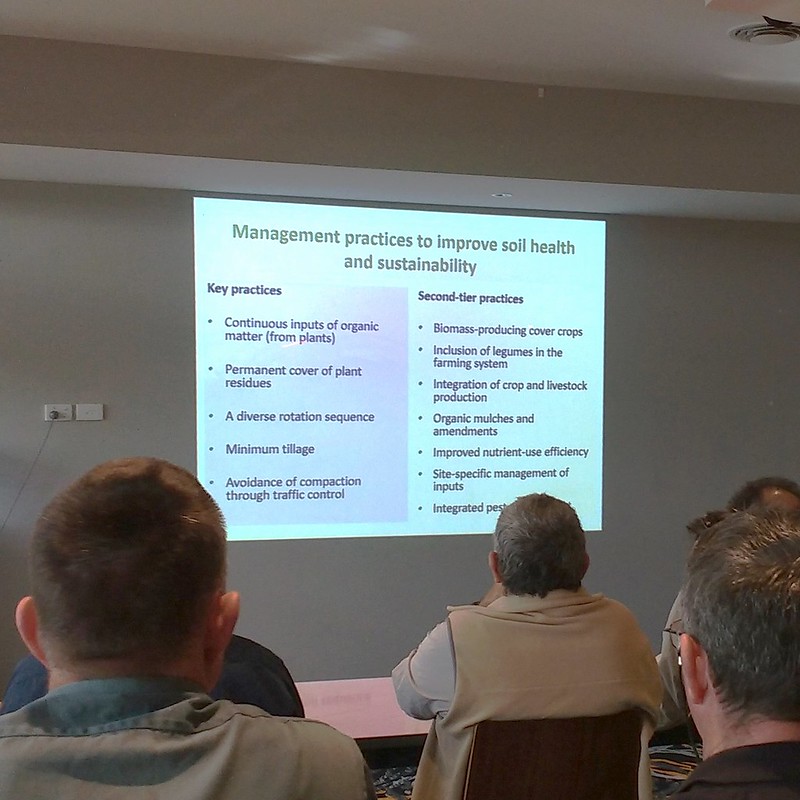 One of the challenging things about all this is that there’s no “silver bullet” to achieve maximum yield from healthy sugar cane plants.

I’m sure yield and pest control is going to be a topic of conversation that comes up again and again as I visit farms here in Mackay in the coming weeks.

Postscript 1 (More from Graham):
Here’s a video from 2014, with Graham Stirling summarising his main recommendations for sugar cane farming:

Postscript 3 (What, no Mackay Sugar?):
When I was getting my cuppa at breakfast, next to the urn was a basket overflowing with these bright yellow sachets: 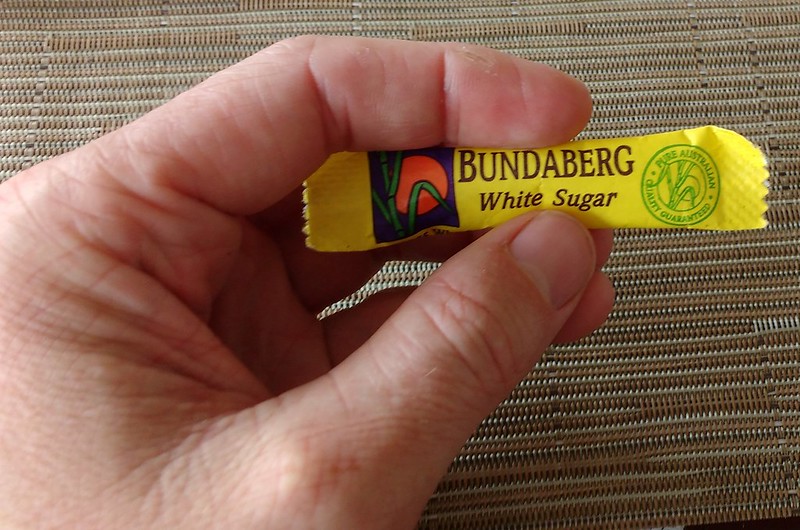 Bundaberg!?
That’s over 600km away!
Where are the Mackay Sugar sachets?

« Sunflowers as agricultural and cultural change agents » …and, bamboo?