In 1987 I had my first Great Barrier Reef experience, snorkelling on one of the outer reefs off Cairns. Seeing for the first time a wonderland of corals and tropical fish remains one of the most astonishing things I’ve witnessed. It was sheer, glorious, teeming beauty.

The second Great Barrier Reef snorkelling trip was in 2005, on an outer reef off Port Douglas. We chose a small operator who employed a marine biologist to accompany us and provide some scientific background to the experience. What I saw that day was some of the glory that I had witnessed in 1987, mixed with large tracts of bleached and dead coral. No-one had prepared me for this. I had heard minor rumblings of coral dieback and had a vague sense that all was not well for the Great Barrier Reef, but this shocked me.

On the return journey to the mainland, our marine biologist busied himself shelling and eating prawns. He paused only long enough between mouthfuls to curtly answer my question “What is causing all the dead coral?” by saying that the reef was healthy and it was normal to see dead coral. He turned away and went back to his prawns. I knew that this was fishy. No-one else spoke up. We were tourists, after all, who had paid good money to have fun and come away with a CD of images of our underwater experience. This CD included images mostly of other snorkellers taken on another occasion with living coral and living fish. We didn’t want to see dead or bleached coral, did we? Yet this had the opposite effect – those rosy images reminded me of what was hidden from view.

The experience of seeing and knowing something for myself and being told otherwise made me wary and cynical. My crap-o-meter peaked whenever it was exposed to the spin coming from vested interests (read small business, big business, whole governments) who claimed that this was all part of a natural cycle. It has taken time for the realities of what is happening to the Great Barrier Reef to be officially acknowledged and widely publicised. But what the Government giveth with one hand, it taketh with the other. Plans to “save” the Reef are up against plans for more coal ports and coal mines. The old economy versus the environment chestnut.

I’ve just been reading the 2015 Australian Government report “Great Barrier Reef Pressures, Resilience and Strong Management Responses” prepared by the Great Barrier Reef Marine Park Authority. While the report acknowledges the challenges to the Reef, it mostly puts a positive shine on its overall future – “The Great Barrier Reef retains the qualities contributing to its outstanding universal value and is not considered to be facing specific and proven imminent danger”. Then the 2016 mass coral bleaching event occurred.

This brings me finally to our camping and snorkelling weekend at Crayfish Beach a few weeks ago. At Lizzie’s insistence (“you can’t do a project about the Great Barrier Reef and not go there!”) and with her enthusiastic planning, Lizzie, Lucas, Albie and I went by barge through the wonderful Whitsunday passage and were dropped off at Crayfish Beach on Hook Island with substantial quantities of camping gear and food. We had been warned by the boat operator to take insect repellent as there were “some” March flies about. This was a grand understatement. In fact it was breeding time and the island was besieged by swarms of March flies. Lizzie was the only one of the four of us who was immune to their infuriating drone and painful sting. She happened to be wearing a white teeshirt dress with a Breton stripe, which kept the battalions of biting beasts miraculously at bay. Instead they headed for the rest of us, attacking us from all directions in what appeared to be orchestrated pincer movements. We found out later that white was the best colour to wear to ward off March flies. This of course gave rise to some fanciful ideas: 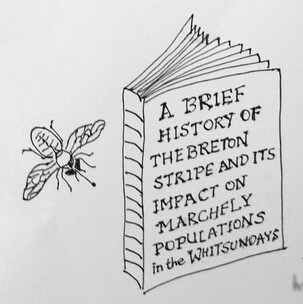 For the rest of us there were two main options: stay in your tent or stay in the water. Consequently I spent a great deal of time in the water, snorkelling over shore reefs. There were tracts of live coral and tropical fish. There was at least the equivalent in dead, algae-covered coral. Now that it’s widely known that the Reef is in trouble (and that it will deteriorate further unless decisive action is taken against climate change and other environmental issues impacting the Reef) it’s impossible to visit the Great Barrier Reef without thinking about what is happening.

Beholding the riot of colour, motion, shape and texture in a live reef with abundant fish species makes me wonder about how coral reefs are ‘built’ and how this whole system interacts. Swimming over algae-covered coral graveyards invites me to think about nitrate run-off and ocean acidification. Watching a turtle swim past makes me ponder the effect on marine habitat of ocean floor dredging for coal export facilities. Floating comfortably in the temperate waters of the Whitsunday Islands reminds me that sea temperatures are rising and bleaching the Reef.

This is not to say that coral bleaching and death has always been a one-way street. There have been recorded bleaching events in the past from which the Reef has (mostly) recovered. The reality now though is that human influence has created the conditions for more frequent and severe bleaching events from which corals may never recover. Over the course of three days, we spoke to many international tourists on the boat and on Hook Island. Everybody seems to know something of what is happening to the Reef and they express concern. The concern is voiced in quiet conversations and is easily masked by the bonhomie of holiday cheer and fun times.