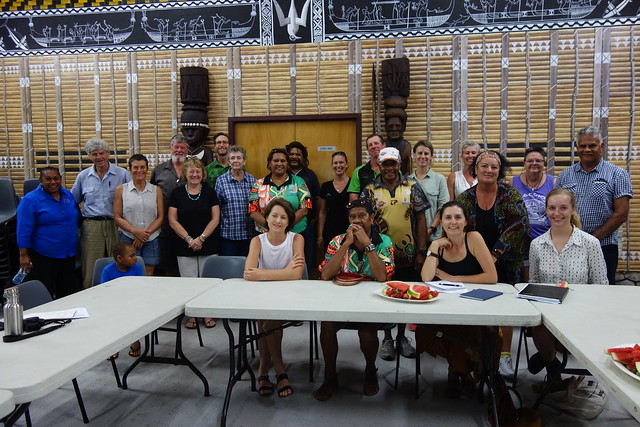 In 2016 Lucas met with Richard Brown, director of Mackay Regional Botanic Gardens, to propose The Botanic Gardens Land Art Project. Over the past year, we’ve had several meetings with Botanic Gardens staff and we’ve gone through a process of negotiation, proposal writing and revision. John Sweet and Simon Mattsson have worked with us closely to nut out the plan.

Nevertheless, it felt like the project really started in earnest on Tuesday 30th January 2018 with a community meeting on a hot Mackay summer day. Starrett Vea Vea, chairperson of MADASSIA (Mackay and District South Sea Islander Association) kindly hosted the meeting at the MADASSIA meeting hut in the Botanic Gardens. We invited quite a few people who we’ve formed connections with over the past couple of years and to our surprise, most of them turned up! Twenty-six people arrived: members of the Yuwibara clan (Traditional custodians of the Pioneer region); Australian South Sea Islanders; representatives from the Great Barrier Reef Marine Park Authority; Reef Catchments; Pioneer Catchments and Landcare; Friends of the Botanic Gardens; worm farmers; cane farmers; retired farmers and interested citizens. It showed us that there’s a lot of interest in this project and its potential for reaching out to the broader community.

After everyone introduced themselves, we talked about the project and people gave us feedback and suggestions. The MADASSIA hut is cleverly designed – the walls lift up in panels to allow air to circulate through the building. During the meeting, a storm blew up from the south and the wind and rain whipped through the hut, so Starrett had to close down the walls and we all had to talk loudly to hear each other. The rain was welcome as the wet season hasn’t really kicked in yet and the farmers desperately need rain. 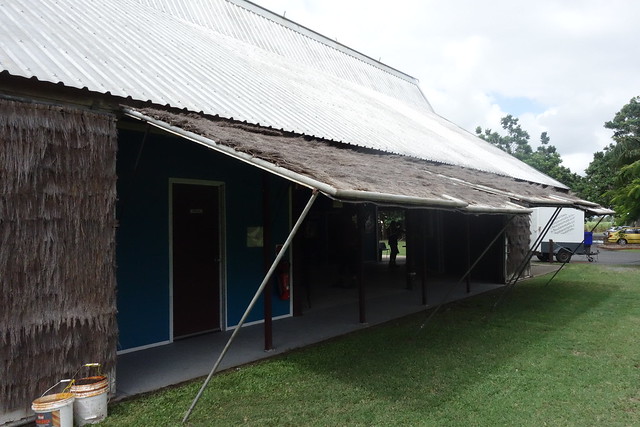 The Botanic Gardens Land Art Project utilises two sites on a large tract of vacant land adjoining the Gardens. The Botanic Gardens acquired the land, formerly a sugarcane farm, and will plant the site out with a native garden in a few years’ time. In the meantime, they’ve allowed us to use a good portion of the land in what is a two-stage project. The first stage – “The Beacon” – involves planting a circular crop of sunflowers and sugarcane as a work of land art and as a demonstration of regenerative agriculture. Around this, we’ll try to involve the community through cultural events, educational workshops and hands-on agricultural activities. The second stage – “The Catchment” – looks at ways of improving a site that is populated by weedy grasses. It’s early days and no doubt many ideas will be explored as the project unfolds. 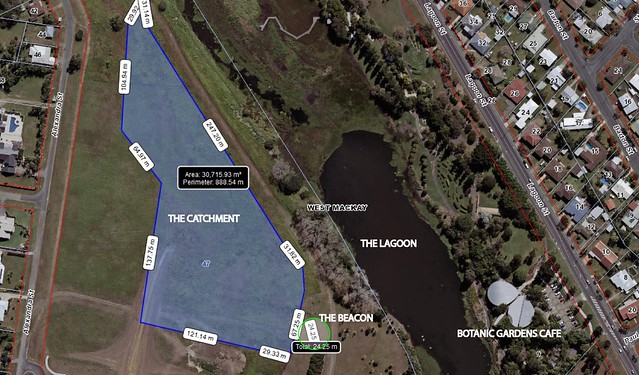