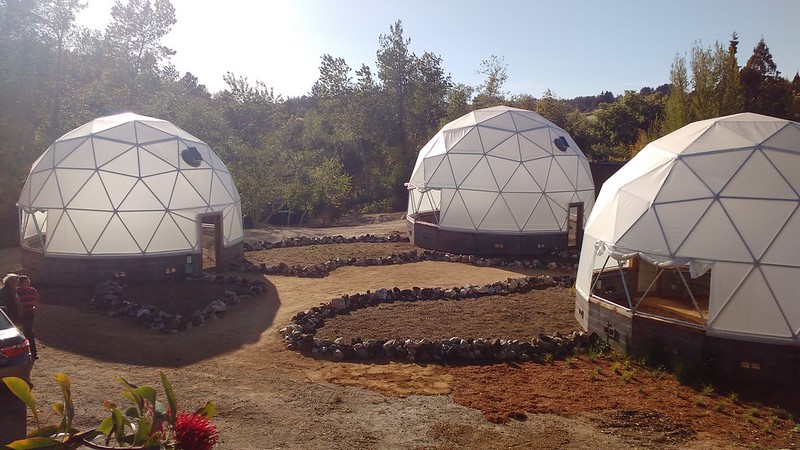 Parallel with our work in Mackay, Kim Williams and I are doing a research trip to USA to meet with artists whose work is like ours (or vice versa) – trying to soak up methods and share ours with them.

Today was special – we visited Newton Harrison (of http://theharrisonstudio.net/) in Santa Cruz.

The Harrison Studio is a “legend of the game”, having been doing work in the field of environmental planning, (negotiating, proposing scenarios for ecologically beneficial land use) since the early 1970s. Their body of work is vast and VERY inspiring for younger artists.

Newton took us to the University of California Santa Cruz Arboretum, where the Harrison Studio has a new artwork launching next week. So this was a preview…

Here’s what you’re looking at in this picture:

Each of these “Buckminster Fuller” Domes has an artificial ecosystem condition.

Each of the three domes, due to the greenhouse effect of the translucent coverings, has a temperature 3 degrees above current ambient temperature.

In each dome several (perhaps 16?) species of local (edible, medicinal) plants are growing. In the areas ringed by stones outside the domes, the same species are planted and these will be subject to the prevailing heat and rainfall conditions.

So, this is a practical demonstration with a question: which species will survive and how will they adapt to raised temperatures from global warming, and changing rainfall patterns?

Newton says the Arboretum has a commitment to this work for the next 50 years.

More info about the work and the Arboretum: http://ias.ucsc.edu/events/2018/future-garden-opening-may-19

Some more photos from our visit to Newton Harrison are here.